NO UNITY AT THE EXPENSE OF TRUTH

‘No unity at the expense of truth’: a response to Justin Welby’s Presidential Address


Andrea Williams, chief executive of Christian Concern and a member of the Church of England’s General Synod, has issued the following statement in response to the Archbishop Justin Welby’s Presidential Address to the General Synod on Monday (15 FEB):


The Archbishop of Canterbury’s presidential address at Synod addressed the aftermath of the recent Primates’ gathering in Canterbury, in which a compromise was reached between two diametrically opposed groups: those who hold to the Bible’s teaching on marriage and sexuality – and those who do not..

Real unity can only grow in the soil of truth. No amount of institutional scaffolding can substitute for healthy soil...

The underlying issue is whether the churches will submit to God’s Word.

An approach to unity which, as long as the institution is upheld, allows an ‘agreement to disagree’ on Scripture’s authority, is counter-productive and doomed to failure.


Unless there is a shared submission to God’s Word, we are not on a shared journey to a shared destination, and no amount of institutional scaffolding will take us there..


He is right in reminding us that Jesus came to set us free. Yet true freedom is freedom from sin, which is found in repentance and the surrendering of human desires to the work of the Holy Spirit. It is not freedom to continue holding to disobedience of the Word...

he Archbishop spoke of the picture of humility that Jesus painted through the washing of His disciples’ feet. But in that humility and servant-heartedness, we must point people to truth. Archbishop Justin failed to speak of truth or of objective revelation from God. It is as if truth has been relegated to a ‘process of discernment’ not a matter of scripture, canons and creed.

This is a capitulation to the ‘spirit of the age’, not the Spirit of God who has spoken in Scripture.

It's important I share this also with my readers. Kim has been released from prison after spending six days in jail. The same "U.S. district court judge who found her in contempt said he was satisfied licenses were being issued in accordance with a U.S. Supreme Court decision".

The order is that she "shall not interfere in any way, directly or indirectly, with the efforts of her deputy clerks to issue marriage licenses to all legally eligible couples."

This is a great news. Let's continue to pray for her and her family. Please pray for revival of faith among Christians. Pray for the persecuted church. God bless.
Posted by Evergreenword on September 10, 2015 No comments:

Finally, Kim Davis is jailed because she refused to issue marriage license to gay couples.

At last, as anticipated, Kim Davis is jailed.

In as much as I do not want to be embroiled in the arguments making rounds on whether she was supposed to obey the court ruling and issue licenses to gays or resign or retire if the order was against her faith and conscience, it is worthy to note that this is part of the spiritual decline within the American system, even the worldly system for that matter, which I do not think has any hope of recovery again. It will only worsen as we draw closer to the end of the age. 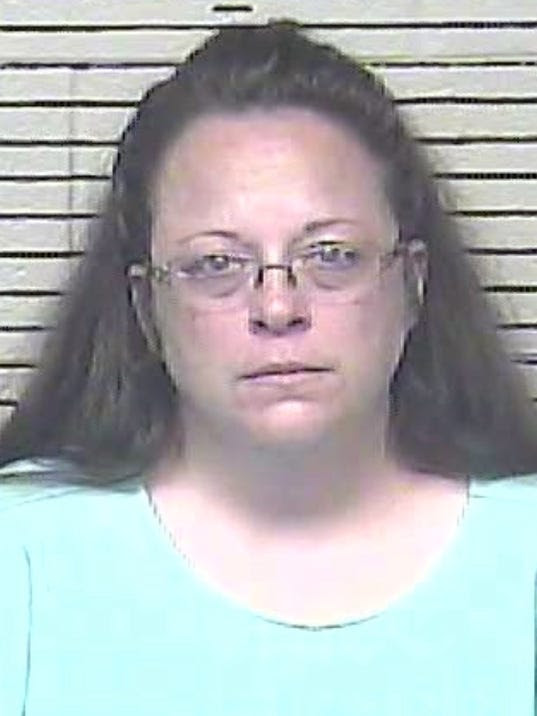 When we posted here that we should pray for Kim, we did not expect that she would not go to jail. Instead we encouraged us to pray for her resolve, so that she would stand strong in her conviction till the end. What played out looks strange to some of us because as pastors and teachers, we do not takeout time to teach church history in our churches today. We rarely mention them in our preaching. But make no mistake about it, Christians were persecuted, killed and burnt at stake based on the framework of the 'laws' that were available in those days. Most of the stance Christians took in those days were 'unconstitutional', 'nonsensical', and 'unpopular'. This is because human reason and intelligence are often flawed in matters of faith. Standing for conscience and conviction is what we need today. Unfortunately most of us as Christian leaders do not even live by any conviction at all.


Most Christian leaders are silent today because they do not want to injure their reputation and some are afraid of the backlash they may receive. Many are even confused. Some have blamed her for insisting on her personal convictions while occupying a public office. Others dig into her past life of failed marriages, children outside wedlock etc. My answer to all these is that, her terrible past proves to us the enormous power of God's grace. Was the supreme court decision correct in the first place? Was it correct not to create a leeway for those who may have a different definition of marriage other than what they have defined  to equally be free to exercise their own right? Or do they have a ploy to get rid of all Christians in the public service who hold fast to their convictions? Like I earlier said, I do not want to bother myself with all the arguments. She has shown virtue and all we can do is to stand by her and not to blame her.  All her staff have caved in except her son for now. Persecution of Christians does not start with the despondent extreme attacks, it all starts like this and then degenerates.

I want to conclude this post by quoting Pastor Martin Niemöller (1892–1984), a prominent Protestant pastor who spent the last seven years of Nazi rule in concentration camps:

"First they came for the Socialists, and I did not speak out—
Because I was not a Socialist.

Then they came for the Jews, and I did not speak out—
Because I was not a Jew.

Then they came for me—and there was no one left to speak for me."

Keep this post in your mind because the situation is not going to get better for genuine Christians any where in the world. We must prepare our minds for the on coming persecution which will come upon the church all over the world where it has not started yet. We will be called bigots, extremists etc. Let's learn how to stand together and encourage one another.

Please keep praying for her and other Christians. May her resolve be a challenge to all of us to begin to stand fast in our convictions and begin to have something we are living for.
Posted by Evergreenword on September 04, 2015 No comments: 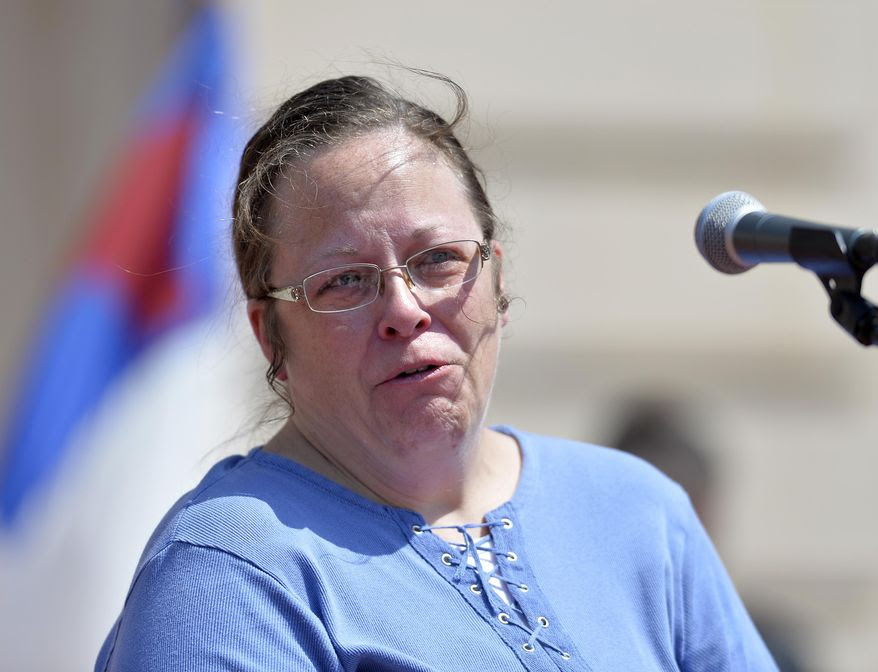 Thank God she has remained strong. Her case reminds me of the apostles when they were brought before the Sanhedrin.

What the authority was requesting from them was simple "stop teaching in this name". But they refused. We discuss their faith as examples in our churches. Today, Kim is faced with the same opportunity to make that choice "Just agree and start signing marriage registers for gays, no matter what your personal beliefs are". However, in the same way obeying the Sanhedrin meant disobeying God for the apostles, obeying the Supreme Court order means disobeying God for Kim and most of us Christians who holds to the clear teachings of the Bible very dearly.

Please continue to pray for her. May her response be like that of the apostles, "...His speech persuaded them. They called the apostles in and had them flogged. Then they ordered them not to speak in the name of Jesus, and let them go. The apostles left the Sanhedrin, rejoicing because they had been counted worthy of suffering disgrace for the Name. Day after day, in the temple courts and from house to house, they never stopped teaching and proclaiming the good news that Jesus is the Christ." Acts 5:40-42 NIV.

Instead of wallowing in self pity, they rejoiced.

Posted by Evergreenword on September 02, 2015 No comments:

This woman and two other Rowan County Clerks in Kentucky have refused to issue marriage licenses to gay couples because of her Christian belief that marriage is between a man and a woman. The USA is a land of freedom as long as the freedom is against the freedom of Christians. All rights must be protected and defended except the rights of practicing Christians. The Supreme Court has ordered her to issue the licenses against her free conscience. 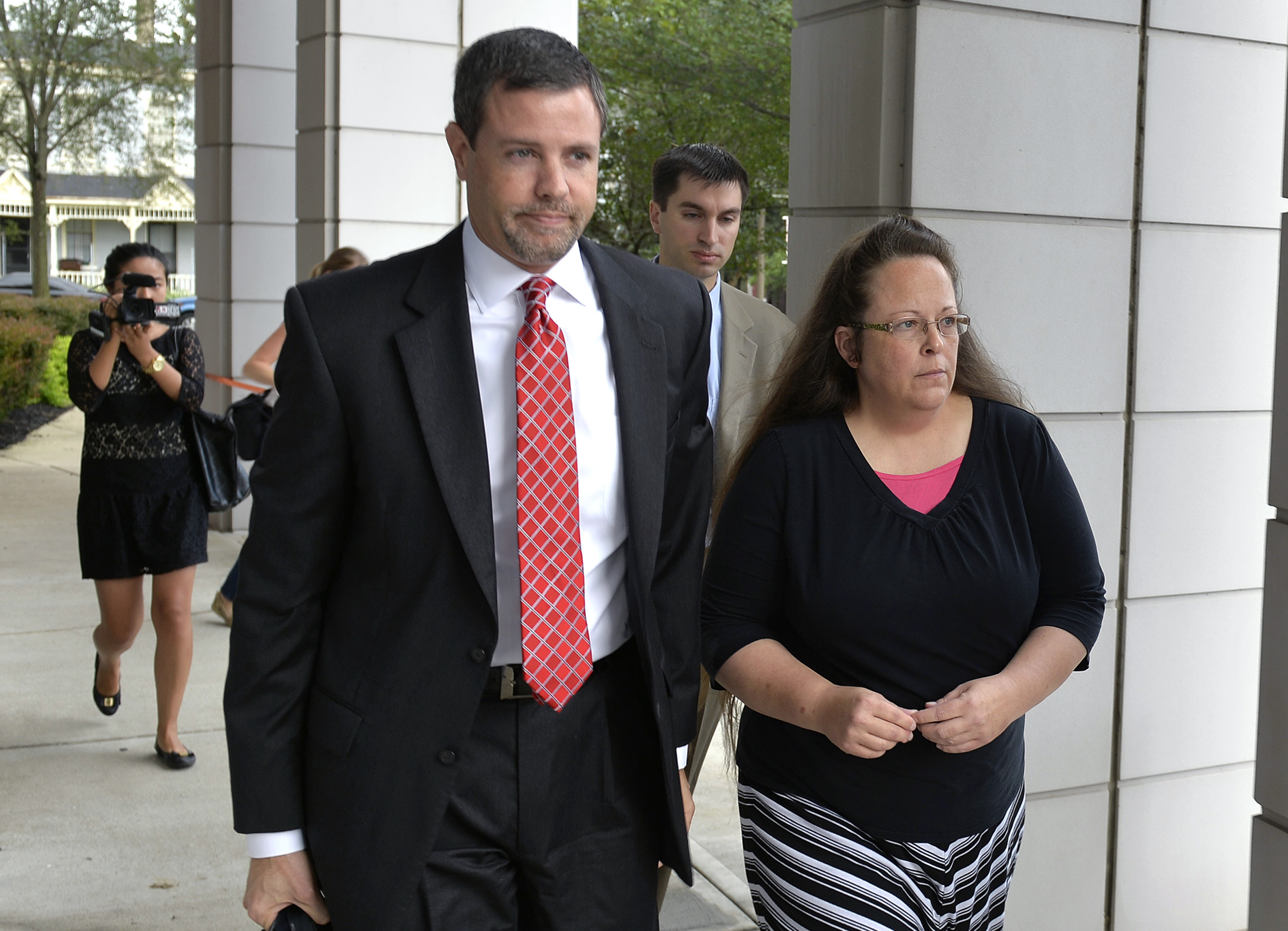 The prayer support is for her and the others to be strong and to stand firm in their conviction and be willing to suffer the persecution that is about to come. As the wind continues to blow in the USA, many genuine Christians might lose their jobs while others may lose money because of court cases, businesses owned by genuine Christians might close down,  etc. Pray that believers will remain faithful to their Lord till the end.

Posted by Evergreenword on September 01, 2015 No comments: