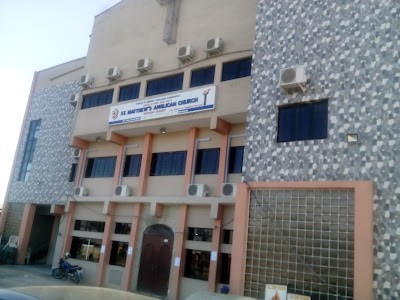 When in a meeting yesterday (15/05/16) we received a report that the Archbishop of the Niger Delta Province, His Grace Dr. I. C. O. Kattey and his Diocesan Board closed down St Matthews Anglican Church, Nkpogu Port Harcourt, Rivers State, Nigeria, everybody in the leadership meeting was taken aback. We prayed for the church and the Lord's Body as a whole. This morning, we visited the Church to really know what the true situation is. As God would have it, we were able to meet with Bro. Ojei, the Administrator of the church who explained what happened.


According to him, the church received information from unofficial sources that the bishop was coming to the church for a reconciliation service because of a protracted legal tussle they have been having for some time now. The service was to start by 9am. St Matthews decided to hold their own service by 7am. Later, they received another information that the time for the bishop's service was changed to 6.30am. They now waited with expectation. However, when they heard that the Youths had been asked to also join the service from different churches in the Diocese, they became apprehensive and had to meet the Police Authorities to provide security to the whole gathering to prevent anything going wrong. Ojei said that the church processed and they had a good thanksgiving service and the Archbishop preached on the Holy Spirit.


But things suddenly began to change when the Registrar of the Diocese during the announcements began to catalogue the legal journey between the Diocese/Archbishop and the church and concluded by saying that they have decided to lock the church building temporarily. They ordered people to go out immediately the service closed. At this point, the spirit of every body sank even among some of the pastors. Some of the pastors that participated in the service did not even know this other side of the Archbishop's plan. Some of the pastors' wives were visibly sobbing at the end of the service.


Bro Ojei said something that was very touching. He said that they are not fighting anybody. They want to go to heaven at the end. They are only working with a sense of duty to do what they are convinced the Lord had called and raised the church to do, that is, evangelism and missions. A missions team came back from Bayelsa State that same Sunday. The church has missionaries they are supporting and sponsoring all over the place.

Concerning the legal issues, he promised that they will follow through the whole legal process to the end and whatever comes out as the conclusion, they will abide by it and take it as God's will. They have a subsisting court injunction while the case lasts as shown below. 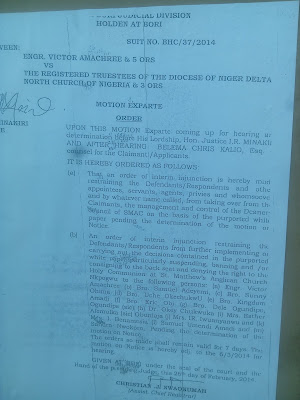 He even alluded that what happened yesterday in the church may be regarded as contempt of court.


We decided to post this so as to give our readers the right perspective because many versions have been making rounds and it is very important that Christians do not engage in hearsay and rumours. We need to have the right information so that we can pray aright for the Body that Christ purchased with His own blood. Our focus here is not to take sides with anybody but to keep sharing issues concerning the church and encouraging our readers to continue to pray.

The Team is just wondering:
Please pray for the Archbishop and his Diocese for godly direction. Pray for wisdom on their part to model Christ in their handling of this matter. Pray for the leaders of St Matthews Anglican Church for humility and spirit of submission in things that will bring solution to this problem.
Pray that God will cause everybody involved in this case to repent in anyway they have shown ego, pride, power and control instead of the humility, gentleness, submission and love modeled by our Lord Christ. May God bring this matter to an end so that His church can focus on how to evangelize the Unreached like the one we shared here. Amen. We believe that the Anglican Church is one of churches God will use in this end time. God bless you.

Please do not hesitate to write us through email in case you have further information or issues to share with us. Remember to drop a few comments.
Posted by Evergreenword on May 16, 2016 No comments: