This is a true saying and nothing but the truth. Sin shall no longer have dominion over you. You do not have to continue to live a defeated life under the dominion of sin.

For example, there are many people today who have committed murder through abortion. Not because they set out to commit murder, but the sin of lust and immorality had it attached to their chain, but the victim never saw it. Let’s look at David; the day he saw Bathsheba taking his bath, he never planned to eliminate her husband so as to have her. One thing led to another and at the end of the day, David’s lust brought adultery and in a bid to cover it up, he conspired against Uriah, betrayed his young army officer, set him up and he was murdered. I suspect that if there was any confidant around David after the whole drama, he would confess to him, “I never intended or planned to murder an innocent blood in my life. I avoided killing King Saul even when I had the opportunity. I don’t know how I entered into this mess”.

The jealousy and hatred of the brothers of Joseph had in its baggage, betrayal, murder and lies. The day they were asking Joseph to shut up in the house after he told one of his dreams was not the day they set out to kill him.  However, that sin of hatred had a chain that was dragging lies, conspiracy, and murder from behind. They did not see them until the time when circumstances arranged themselves. Indeed, sin comes with a chain. One sin leads to another and to another and to another. If the chain is not broken early, it leads to other bondages. Our prisons today are filled with many people who have the remaining part of their lives wondering what made them do what they did. There are a lot of people whose lives are broken because of some things they have done and they are wondering how they got to the point they are today. Some will even look at their childhood pictures and are wondering what happened that the innocent face in the picture has put his hands into sins he never dreamed. It just started with one innocent-looking enticement to sin and then the chain entangles.

The last person we will look at is Judas Iscariot who kept stealing money from the money box he was keeping for years, parleying with some wrong people in power and never knew that all these would create insensitivity towards sin in his heart, so strong that he would conspire to betray and sell his Master. The day the Lord Jesus called Judas, he did not set out that he would end up committing suicide. He followed like every other person. However, one opened door to sin led to another and the chain continued until he lost all sensitivity towards sin.

Child of God, never you underestimate any sin. It is not alone. It has a chain no matter how simple and innocent-looking it may seem. If you are already trapped, you do not have to continue in the slippery road; you will only end up sliding down even into things you never bargained for in your life. Snap that chain! Sin shall not have dominion over you. That is the truth.

Now one may ask, how can I break the chain?
Godly sorrow: breaking the chain of sin starts with godly sorrow. The prodigal son came back to his senses, asked himself sincere and personal questions which people around him possibly did not know about. He changed his mind and decided to snap the chain of his sinful living. He humbled himself and was even ready to accept becoming a servant in his father’s house.

You must stand before God as somebody who has no arguments in defense. Accept His verdict and tell Him you are sorry. Ask for mercy.

Radical action of turning: breaking the chain of sin involves taking some radical steps no matter whose ox is gored. Whose life is being ruined? Yours! Whose life is entangled? It’s yours! Hence, who will take the radical turn? You! Again, the prodigal son dammed the shame and headed home to face the father he disappointed through his riotous living. He did not stop on the way. He did not branch into bypass. He headed home to face his father, elder brother, relatives and servants. His chain was snapped the day he turned, parked his bags and headed home, not the day he cried over his life of suffering. There are people who may need to move from where they are now to another location if their chains must be broken. Others may take some costly decisions. But in all, make sure that you break that chain. Sin shall not rule over you!
Posted by Evergreenword on September 01, 2012 No comments:

Pray for the persecuted Nigerian Church!

My plea with us this first month of the year is that we remember the persecuted brethren in Northern Nigeria in our Church, group, family and personal prayers.

In the Nigerian Church, there is an evolving culture of using January for Fasting and Prayer in preparation for the year. There is nothing wrong with having Fasting and Prayer but what we do within period determines whether we are eternally minded or not. What we do within the programme determines whether we are concerned with what burdens the heart of God or not. 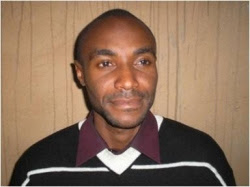 On the 28th of August, 2011, our brother Mark Ojunta was murdered while serving among the Kotoko people group in North Eastern Nigeria.

In Christian Post, it was reported that “ 36-year-old evangelist Mark Ojunta, from southern Nigeria, was ministering amid the Kotoko people of Nigeria's northeastern state with Calvary Ministries (CAPRO) when he was shot in Maiduguri. Boko Haram reportedly killed at least 23 Christians during August alone; beginning on Aug. 11 through Aug. 15 where attacks in Rasta Foron village resulted in six dead, and on Aug. 15, in Heipang village, where nine members of one Christian family were killed.

These deaths were followed by the murder of six Christians on Aug. 21 in Kwi, lotion, and Jwol villages, and, on Aug. 14, in the community of Chwelnyap, where two more were killed at the hands of militants”.

In January 2012, they carried out series of attacks on Christians and their places of worship. One was on Deeper Life Bible Church in Gombe. According to Sahara Reporters, "The attackers started shooting sporadically. They shot through the window of the church, and many people were killed including my wife," Mr Jauro told Reuters news agency.

From Reuters, On the 6th of January, “Gunmen opened fire in a hall in Mubi on Friday where a group of Christians had gathered to mourn the deaths of those killed in an attack the previous day.
"Unknown gunmen in Mubi attacked and killed 3 people on Thursday night and on Friday as people gathered to mourn the deaths, the gunmen believed to be the same attackers killed 18 people, totalling 21," a Red Cross official told Reuters.

A lot of indigenous Churches have been burnt down, pastors killed and members scattered. Brethren are living in fear. Those who are non indigenes may run back South to their villages but what of the brethren who are Northern Nigerian indigenes?

Now, is it time for Churches to gather in their Fasting and Prayer programmes concentrating on claiming one earthly possession or another? Is it time to focus on making frivolous promises to members just because you want to raise their hope? Is it a time to lead the people into ‘covenants’ that we cannot prove from the Scriptures which we have discussed here? Or is it not time to lead the Church in repentance and cry to Him for the National Church? These are perilous times.

The other day, I saw a reverend gentleman speaking passionately in the ranks of the protesters against the removal of petrol subsidy over the past few days. My heart was stirred up. I thank God for him. However, God is looking for men and women who will equally be on fire for the matters of the voiceless believers who are suffering and living in fear.

God bless!
Posted by Evergreenword on January 15, 2012 No comments:

He was asked, "If you could, would you go back and do anything differently?"

He answered, "Yes, of course. I'd spend more time at home with my family, and I'd study more and preach less. I wouldn't have taken so many speaking engagements, including some of the things I did over the years that I probably didn't really need to do—weddings and funerals and building dedications, things like that. Whenever I counsel someone who feels called to be an evangelist, I always urge them to guard their time and not feel like they have to do everything.

I also would have steered clear of politics. I'm grateful for the opportunities God gave me to minister to people in high places; people in power have spiritual and personal needs like everyone else, and often they have no one to talk to. But looking back I know I sometimes crossed the line, and I wouldn't do that now."

Billy is a man that many of us can look at as an example. I'll take heed to this advice. I hope that you equally do.