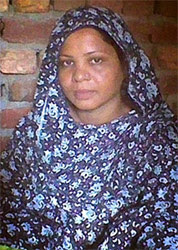 From Voice of Martyrs, Please pray that God's strength and peace will sustain Asia, her family and those representing her (Philippians 4:7), while also keeping them safe from any assault or threat against their lives. Ask Him to grant wisdom, courage and protection to the members of the Pakistani government, as well as the Supreme Court judges who will be hearing Asia's appeal. May they not be intimidated by the militants but rather encouraged to act justly and extend mercy. Through it all, may Asia's case be used to highlight the injustice of Pakistan's blasphemy laws and to testify of her steadfast Christian faith to many around the world.
Posted by Evergreenword on November 01, 2016 No comments:

Praise God for Asia Bibi - her death sentence has been suspended

Asia Bibi, a Christian mother who has been on death row for blasphemy since 2009, has got her sentence suspended. We have shared her story here in Evergreen Website.  The Voice of Martyrs reports that on July 22nd a panel of judges suspended her death sentence.

The case against this long-suffering follower of Jesus will be thoroughly reviewed by the country's Supreme Court before a final ruling is made. In light of the recent hearing, a VOM worker in Pakistan wrote, "By the grace of God, this is a big achievement. This is an answer to the prayers of people around the world."

Please continue to pray that she may be acquitted completely soon because it is not yet over. Also, continue to remember other  believers who are still in the prison in Pakistan for God's intervention.


For more information, go to Voice of Martyrs site here.
Posted by Evergreenword on August 07, 2015 No comments: