Global Rise in Christian Persecutions in the coming days.

“Every five minutes a Christian dies for his faith.” That was a statement made by Massimo Introvigne, the Commissioner for Religious Freedom of the Organization for Security and Cooperation in Europe (OSCE) as reported Canada Free Press.

These are not easy days especially for those Christians who live side by side with Muslims as neighbours. These are perilous times.

As we approach the close of this age, there is going to be a tremendous increase in the persecution of Christians worldwide. What we are seeing is only the beginning of 'birth pangs'. Many may think it is going to be limited to the lands where Muslims are dominant. No! It will equally take place in the so called developed countries. It is not dependent on how wise we are, it is dependent on what the Word of God says.

If you look at the events that led to the Holocaust, part of the sentiment was that the Jews were responsible for the economic woes of Germany and the Great Depression and that the Jews plan to dominate the world as recorded in a fraudulent book called "The Protocols of the Elders of Zion" There was widespread antisemitism all over Germany and greater part of Europe. Hitler exploited this when he came to power in 1933 and began to implement his plans which he outlined in Mein Kampf published in 1924. When he began the massive extermination of the Jewish population, much of the populace did not see it as an issue, even Christians. The best many did was to be indifferent. Today, we live with the history of one of the worst genocides ever committed against a people group - the Holocaust.

Why do I draw this historical lesson? There is a growing sentiment against Christians all over the world and the drum is being beaten very loudly by the media. It is as if Christians are the cause of the problems and violence perpetrated all over the globe. In Communist countries, they are seen as spies who cooperate with 'foreign elements' to undermine the powers of the state. In the Islamic countries, they are not just seen as spies but also they are seen as 'infidels' who should be subjugated or killed before they corrupt the 'holy' Muslims. All the recent persecutions, killings  and sufferings of Christians all over the world attest to this. In the Western countries, Christians are seen as the only obstacles against for example legalized abortion, homosexuality and 'freedom' which at best can be described as license to live in sin. Starting from the media to the movie industries, from Civil Rights to the Academia, there seems to be a commitment to destroy Judeo-Christian culture and principles. The world do not want to have defined absolutes. Very soon, Christians will begin to go to jail for some evangelism activities in these countries. It is as if the world will know peace if only Christians will keep silence and stop insisting that Jesus Christ if the only Way to God. Life will become difficult for committed Christians in the coming days. There are many situations that will lead to all these, both circumstantial and planned. It is already happening like Massimo's comment shows above.

Never assume "it will never get to me". Get involved now in the ministry towards the persecuted. Train yourself now in holy and righteous living. Take the tough decisions now to please God in all that you do.

The challenge is, is your faith strong enough to carry you  through evil days and to the end? Is your anchor strong on Christ alone? It is true that many churches prepare and motivate their members on how to become rich and wealthy; I wonder how many equally prepare them on how to stand strong in the days of trials and turmoil that are about to come? The Bible is correct when it says, "In fact, everyone who wants to live a godly life in Christ Jesus will be persecuted" 2 Tim 3:12. NIV. Better be prepared now and make sure you are standing on the Solid Rock.

Posted by Evergreenword on September 25, 2012 No comments: 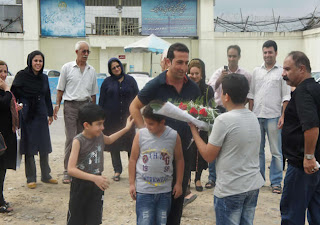 It is with great joy that we announce to you the release of our brother Youcef Nadarkhani from prison in Iran. Present Truth Ministries announced this on Saturday that Pastor Youcef was acquitted of apostasy charges but found guilty for proselytizing Muslims. He was sentenced to three years which he has already served during his detention in prison. He has been reunited with his family.

"He said, "Thank you to everyone that has supported me with your prayers." He is now home with his family."

Many of you responded to our call to prayer and really prayed. It is worthy that you equally share in this good news.

"Please continue to keep Youcef in prayer. Another prisoner with apostasy charges, Pastor Mehdi Dibaj, was realeased and then murdered shortly thereafter. Let's pray for safety and protection for our brother, as well as everyone involved in his case."

Please make sure you continue to pray for him and all the persecuted brethren from around the world. God bless you!
Posted by Evergreenword on September 10, 2012 No comments:

This is a true saying and nothing but the truth. Sin shall no longer have dominion over you. You do not have to continue to live a defeated life under the dominion of sin.

For example, there are many people today who have committed murder through abortion. Not because they set out to commit murder, but the sin of lust and immorality had it attached to their chain, but the victim never saw it. Let’s look at David; the day he saw Bathsheba taking his bath, he never planned to eliminate her husband so as to have her. One thing led to another and at the end of the day, David’s lust brought adultery and in a bid to cover it up, he conspired against Uriah, betrayed his young army officer, set him up and he was murdered. I suspect that if there was any confidant around David after the whole drama, he would confess to him, “I never intended or planned to murder an innocent blood in my life. I avoided killing King Saul even when I had the opportunity. I don’t know how I entered into this mess”.

The jealousy and hatred of the brothers of Joseph had in its baggage, betrayal, murder and lies. The day they were asking Joseph to shut up in the house after he told one of his dreams was not the day they set out to kill him.  However, that sin of hatred had a chain that was dragging lies, conspiracy, and murder from behind. They did not see them until the time when circumstances arranged themselves. Indeed, sin comes with a chain. One sin leads to another and to another and to another. If the chain is not broken early, it leads to other bondages. Our prisons today are filled with many people who have the remaining part of their lives wondering what made them do what they did. There are a lot of people whose lives are broken because of some things they have done and they are wondering how they got to the point they are today. Some will even look at their childhood pictures and are wondering what happened that the innocent face in the picture has put his hands into sins he never dreamed. It just started with one innocent-looking enticement to sin and then the chain entangles.

The last person we will look at is Judas Iscariot who kept stealing money from the money box he was keeping for years, parleying with some wrong people in power and never knew that all these would create insensitivity towards sin in his heart, so strong that he would conspire to betray and sell his Master. The day the Lord Jesus called Judas, he did not set out that he would end up committing suicide. He followed like every other person. However, one opened door to sin led to another and the chain continued until he lost all sensitivity towards sin.

Child of God, never you underestimate any sin. It is not alone. It has a chain no matter how simple and innocent-looking it may seem. If you are already trapped, you do not have to continue in the slippery road; you will only end up sliding down even into things you never bargained for in your life. Snap that chain! Sin shall not have dominion over you. That is the truth.

Now one may ask, how can I break the chain?
Godly sorrow: breaking the chain of sin starts with godly sorrow. The prodigal son came back to his senses, asked himself sincere and personal questions which people around him possibly did not know about. He changed his mind and decided to snap the chain of his sinful living. He humbled himself and was even ready to accept becoming a servant in his father’s house.

You must stand before God as somebody who has no arguments in defense. Accept His verdict and tell Him you are sorry. Ask for mercy.

Radical action of turning: breaking the chain of sin involves taking some radical steps no matter whose ox is gored. Whose life is being ruined? Yours! Whose life is entangled? It’s yours! Hence, who will take the radical turn? You! Again, the prodigal son dammed the shame and headed home to face the father he disappointed through his riotous living. He did not stop on the way. He did not branch into bypass. He headed home to face his father, elder brother, relatives and servants. His chain was snapped the day he turned, parked his bags and headed home, not the day he cried over his life of suffering. There are people who may need to move from where they are now to another location if their chains must be broken. Others may take some costly decisions. But in all, make sure that you break that chain. Sin shall not rule over you!
Posted by Evergreenword on September 01, 2012 No comments: