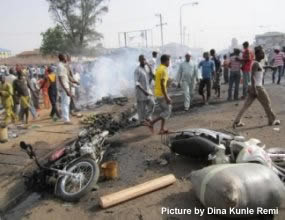 A car bomb exploded along a busy roadway Sunday morning in a central Nigeria city, killing at least 38 people in the latest attack on a region beset by religious, ethnic and political violence, an official said.
The blast struck Kaduna, the capital of Kaduna state, leaving charred motorcycles and debris strewn across a major road in the city where many gather to eat at informal restaurants and buy black market gasoline. Nearby hotels had their windows blown out of by the force of the powerful explosion, which engulfed a group of motorcycle taximen.

At least 38 people were killed in the blast, said Abubakar Zakari Adamu, a spokesman for the Kaduna state Emergency Management Agency. Others suffered serious injuries and were receiving treatment at local hospitals, Adamu said.
The explosion badly damaged the nearby All Nations Christian Assembly Church as churchgoers worshipped at an Easter service, the possible target of the bomber. Witnesses said it appeared the explosive-laden car attempted to go into the compound of that church before it detonated...

Please continue to pray for the Nigerian Church for a re-awakening. Pray that God may console those who are grieving and cause the perpetrators to repent. Pray that those in leadership positions will have the will to do what is right.
Read more!
Posted by Evergreenword on April 08, 2012