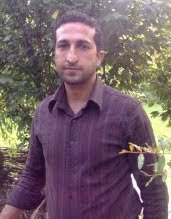 Execution orders may have been issued for Iranian pastor Youcef Nadarkhani. Please pray for Pastor Youcef!

According to contacts in Iran, the execution orders for Christian Pastor Youcef Nadarkhani may have been issued. Pastor Youcef's situation -- an innocent man convicted and sentenced to death for becoming a Christian -- has reportedly not been this dire since his story was first reported.

It is unclear whether Pastor Youcef would have a right of appeal from the execution order. The head of Iran's Judiciary, Ayatollah Sadegh Larijani, must approve publicly held executions, but only a small percentage of executions are held public -- most executions in Iran are conducted in secret.

For more go here.
Posted by Evergreenword on February 24, 2012 No comments:

I have been to several wedding ceremonies and saw the friends of the bridegrooms perform in different colours. Some ran around for several days trying to support the bridegroom to make the wedding ceremony a success. Many even participated in procuring very personal items like wedding gowns, rings, shoes etc for both the bride and the groom. However, there is one thing I have never seen: the bridegroom leaving his place and allowing his friend to marry his wife for him.

Many years ago when we came into the city after our high school, five of us were living in one room with only one person, a very magnanimous brother, catering for everybody because God blessed him with a good job early. Several of us were in relationships we hoped would end up in marriage. We made fun calling ourselves “shoe shiners”. We would always joke that no matter how you shine someone else shoes, afterwards, you must hand over the shoes back to him because he is the owner. You are not. The idea was that we were all committed to the welfare of the fiancées of each other. However, no matter how committed we were, nobody crossed an obvious boundary of acting as if he has the bride. Many of us ran away when either the fiancée or family of a friend’s fiancée began to give us undue attention at the detriment of our friend.

John the Baptist called himself a friend of the bridegroom while answering a question from his disciples in John 3: 26-30 and he taught us great lessons on how to handle and serve the Church, the Bride of Christ.

“They came to John and said to him, "Rabbi, that man who was with you on the other side of the Jordan — the one you testified about — well, he is baptizing, and everyone is going to him." To this John replied, "A man can receive only what is given him from heaven. You yourselves can testify that I said, 'I am not the Christ but am sent ahead of him.' The bride belongs to the bridegroom. The friend who attends the bridegroom waits and listens for him, and is full of joy when he hears the bridegroom's voice. That joy is mine, and it is now complete. He must become greater; I must become less. John 3:26-30 NIV

When Paul said that he betrothed the Corinthian Church like a virgin to one husband, he was actually acting as a friend of the Bridegroom. He was saying, “I have worked to prepare the Bride for her Bridegroom. I have not exploited her. I have not taken advantage of her though the Husband is yet to arrive. I am handing the Church to her Husband as a virgin”. He never stood in the position of the husband for any while.

What happens is that the Lord equips every one of His children, with gifts and ministerial offices, so as to play a part in equipping and preparing His Bride for Him. He does not give His Bride to anyone to marry for Him for a time and then later, hand over to Him. The ministry we have from Him already is based on this trust, that we will carry out and finish our work and still leave His Bride uncorrupted, unexploited and still a virgin, intact. What we are doing is like what a eunuch would do in those days. They used to prepare and attend to the brides of kings. At no point will he ever assume or behave as if the bride is his. Whatever items of beautification, or food he is given for the bride, he delivers faithfully. To be emotionally attached to the king’s wife is out of the question. He has been castrated ever before he entered the service. Never will he misbehave or maltreat her. His fulfillment comes when the bride is presented to the king and the king is please with her.

Any mistake can cost him his head. Remember the man, Haman, only because the king saw him around the wife in a manner he considered inappropriate, he was hanged. Those who are in the business of attending to the King’s Bride know that it is a precarious service with great responsibility. This is because they know that it can cost them their life, even eternal life. There is no man the Lord handed the Church over to in trust as if to stand in for Him for sometime before He comes. What we have in trust are our ministries which all aim at preparing the Church for Him. The fact that we even have the gifts and ministries is a privilege. It is an honour to participate in preparing and equipping the King’s Bride for Him.

It is a deception for a church leader to carry on as if the church belongs to him. There are those who use the church resources for whatever they want without being accountable to anyone. They oppress those under them like a tyrant and see church members as an opposition camp or a farm. They forget that these ones under them, both pastors, other church leaders and members, are all part of the Bride the Lord has called them to equip and serve. It is a misconception for a leader to see the church as his personal farm, field or investment. The husbandry belongs to God.

True, God’s servant gets his due from the harvest of the field but both the farm and the entire harvest belong to the Owner. He partakes of the harvest as one who will give account. Knowing this, a wise servant opens himself up to human accountability helps and sets all the tools around that will act as checks to help him prepare for the day he will give account before God. It is a foolish servant that dismantles all the structures that place accountability demands on him simply because he wants to be free to use the church resources the way he wants. This makes us as like owners and hence we behave like the servant Jesus talked about in Matthew 24: 48-51. The church is not to be used to build personal empires. Doing all these is meddling with the King’s Bride.

Let’s all renew our commitment to preparing and equipping the Bride for her Bridegroom. Let all of us rededicate ourselves to playing our part in making the Bride ready. We cannot be here forever. We are only contributing our own quota. Others have gone before us. This is our time. When we are gone, others will continue the work till He comes. Come Lord Jesus, come!

God bless!
Posted by Evergreenword on February 21, 2012 No comments: